Gruissan is one of the most beautiful villages in France with its famous Tour Barberousse. We all have in mind this mindblowing postcard when we arrive from Narbonne: that of a village set on the water between lagoons, the Mediterranean and the scrubland.

The construction of the village

The village is round-shaped, built in "circulade". The alleys wind around the "Tour Barberousse" (Barbarossa Tower), like a snail. The circular villages appear around the year 1000 in Languedoc. Such a construction actually answered the need for defense. The village could be more easily closed in the event of an attack. The shape of a snail is a trap for invaders who rush through the streets and cannot turn back. The village had two gates (one towards the source of Ile Saint-Martin and the other towards Narbonne) and it was surrounded by a city-wall which will be destroyed in the 19thth century when the village expands.

Where does the name “Gruissan” come from?

It probably dates back to Roman times. The terminations are the same for many villages in Languedoc (-ssan: Armissan, Vinassan, Coursan, Nissan…). A veteran of the Roman army and land-owner (here, probably named Grussius), gave his name to his domain (Grussianum) which over time became Gruissan 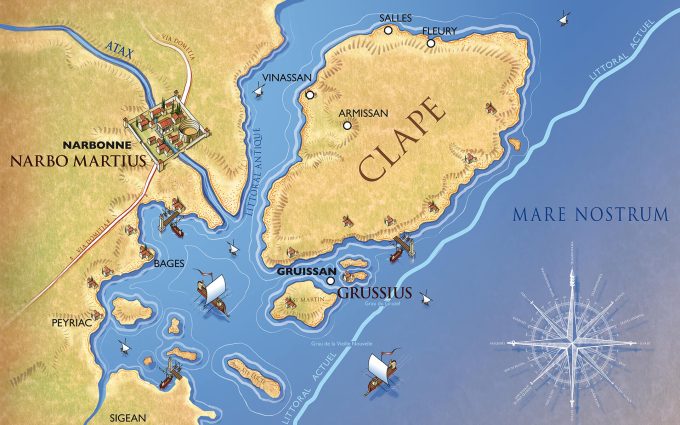 Gruissan at its origins

The coastline appeared around the 1ster century BC, which means that the sea entered inland forming a huge gulf. The latter was open to the sea and arrived at the foot of Narbonne. The gulf was scattered with several islands: La Clape (today a mountain) was the largest of all, the Ile Saint-Martin, the Rocher de Gruissan, etc.

The Aude river then flowed into this gulf and carried many elements torn from the Pyrenees which were deposited little by little. Over time, the gulf slowly filled in, then it closed itself and the islands slowly connected with each other.

This long process began in ancient times and continued throughout the medieval period. Which means that during most of the Middle Ages, Gruissan was an island accessible only by boat. 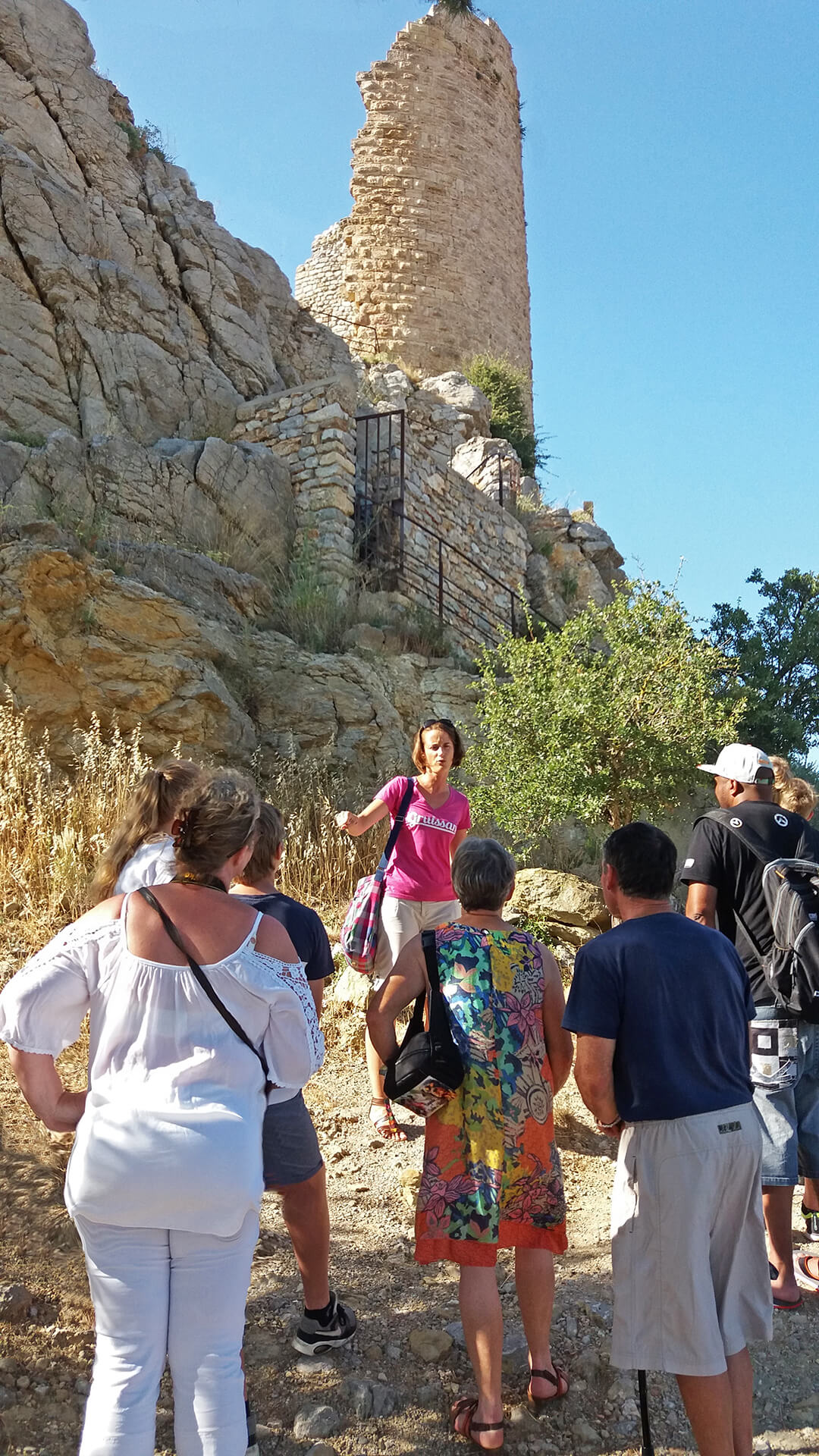 Gruissan was inhabited during Prehistory. Remains have been discovered in the Grotte de la Crouzade which can be visited during Heritage Days (September).

The port of Narbonne

The vestiges of Roman boats (found in Mateille) prove that Gruissan was used as a port for the Roman colonies of Narbonne. The city of Narbonne was extremely rich and the Romans called it "the daughter of Rome outside Italy". 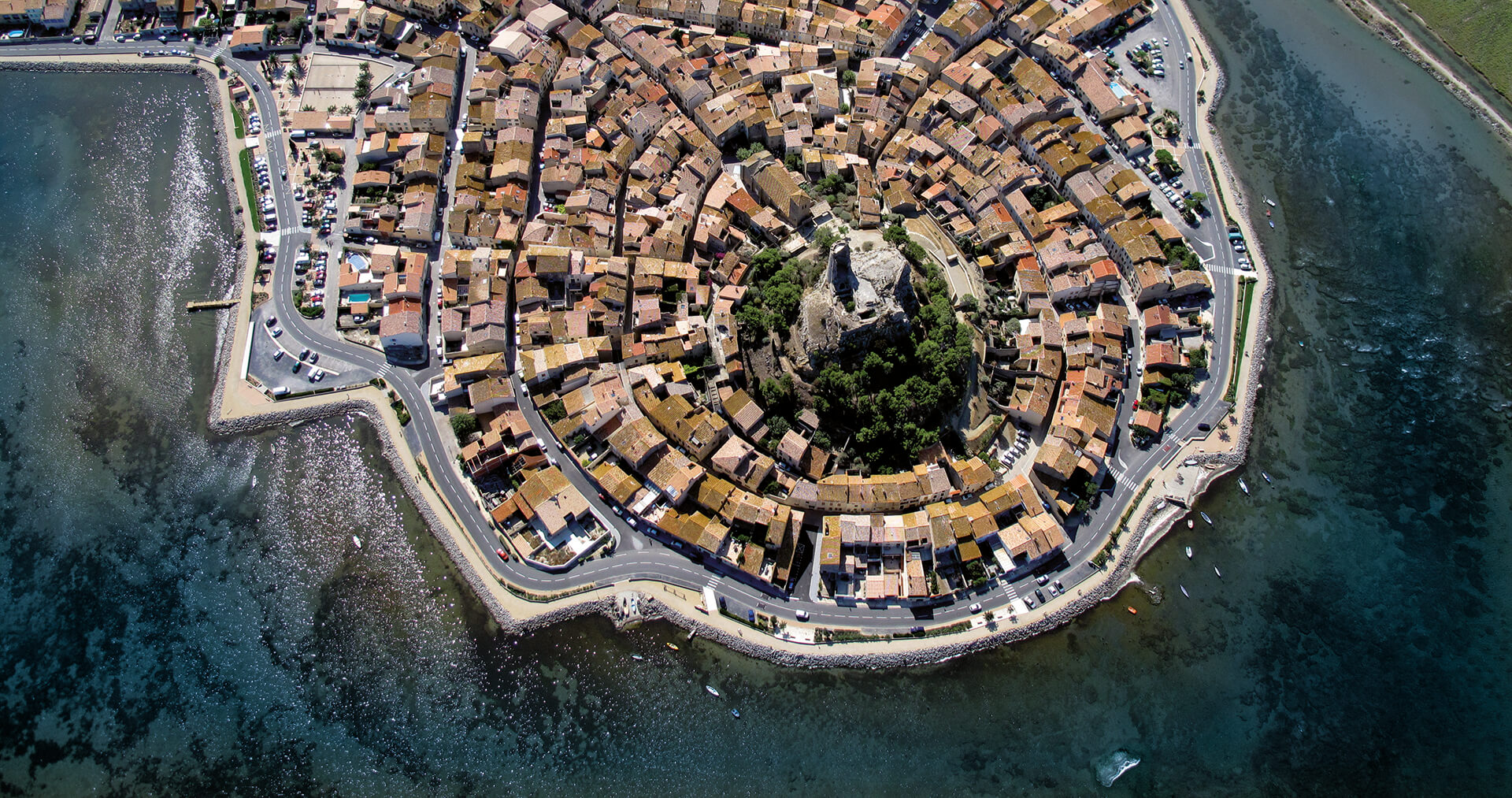 Gruissan is the only circular village on the Mediterranean coast.

The archaeological site of Ile Saint-Martin has revealed important remains which bear witness to economic activity. A large public building built at the very beginning of the Ier century AD, this vast building of 2500 m² was the administrative and commercial center of the excavation site. But the most remarkable discovery during this campaign is that of a large tower. It was undoubtedly a lighthouse guiding ships to enter the lagoon and reach the port. At the foot of this tower, two large, very well-preserved cisterns made it possible to permanently have a reserve of fresh water for boats which had to go to sea. These new discoveries therefore confirmed the port vocation of the Saint-Martin site and its strategic role in the organization of the Narbonne port system. 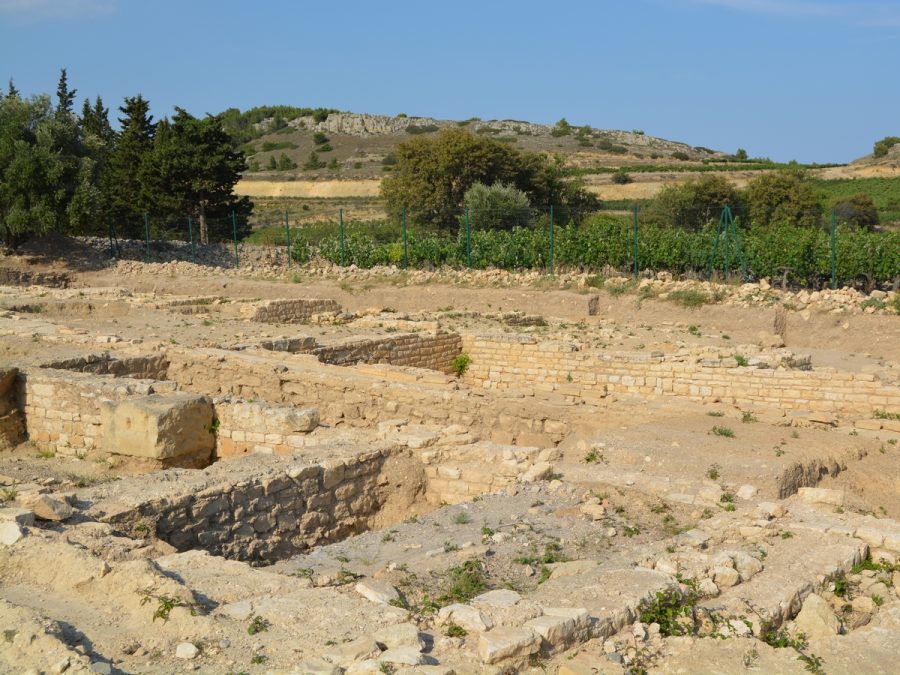 In medieval times, from the 11th century AD, the inhabitants settled at the foot of the rock on which there is a small defensive fortress. The castle had 3 towers with a walkway, buildings, a prison, a cistern, a chapel ...

Why build a castle? To protect the city of Narbonne which was very wealthy in medieval times thanks to the seat of the Archbishop. Narbonne had to defend its access from land AND sea, made even more dangerous because of the pirates. From Gruissan, the soldiers of the archbishops could watch the sea and warn Narbonne in case of danger and, occasionally, repel invaders. At 13th century, the castle will be used as part of the defense system of the French border.

It is the only castle tower to have survived the destruction. It was built between 1245-1247 by Archbishop Guillaume de Broa to defend the borders of the French kingdom.

The castle was damaged during the wars of the Catholic League and the Fronde. Louis XIII probably decided to destroy this fortress in retaliation from local lords who had sacked the region. In addition, it had also become useless due to changes in military techniques. The castle is dismantled and the stones reused to build houses in the village. 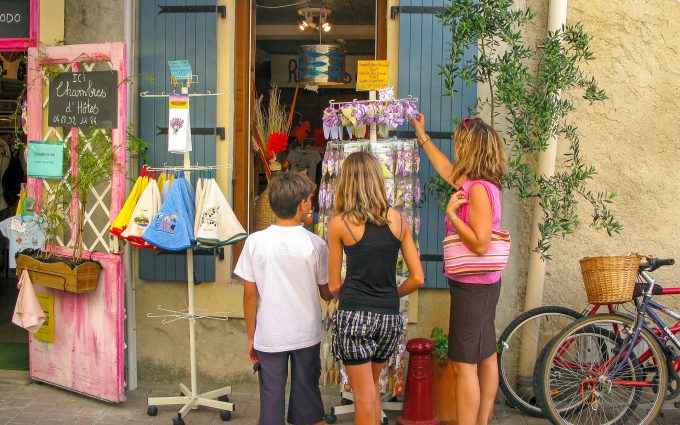 The legend of Barbarossa

Barberousse was a privateer (because he was mandated by a sovereign) who lived at 16th century. He was the 1er admiral of the Ottoman fleet, king of Algiers, commander of hundreds of ships across the Mediterranean. He was feared everywhere, cruel and ruthless. But he never came to Languedoc according to the archives! He died in 1546, 300 years after the construction of our famous tower.

A local lord, Gaspard DOT, nicknamed Barberoussette, is mentioned in the archives. He comes to defend Gruissan during the wars of the League. 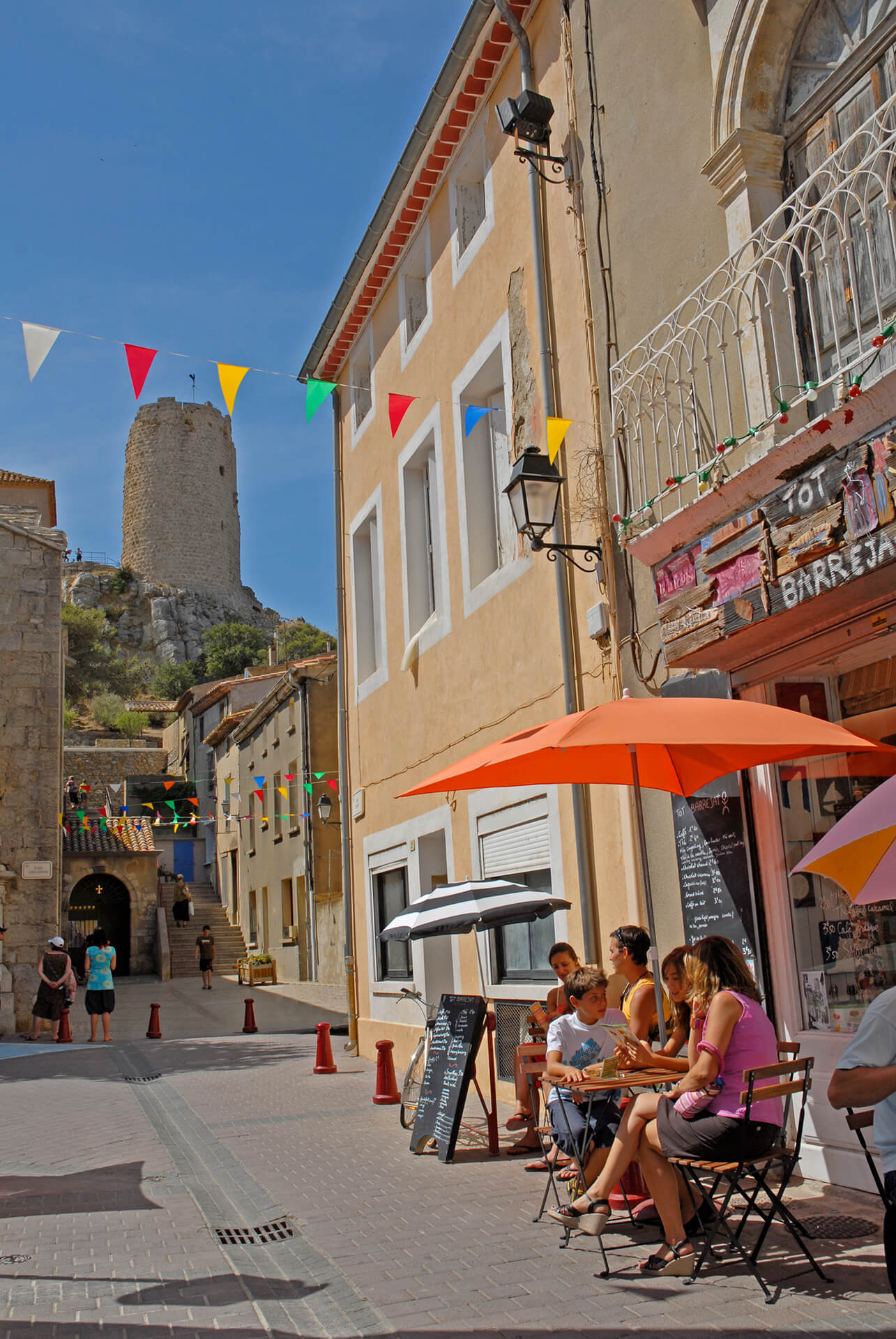 Discover the secrets of the village as a family by following our guide. Take turns playing explorers, archaeologists and pirates ... A fun way to explore Gruissan and learn more about its castle, its church and the organization of the village a long time ago ... (only available in French, guided tours in English for groups upon request) 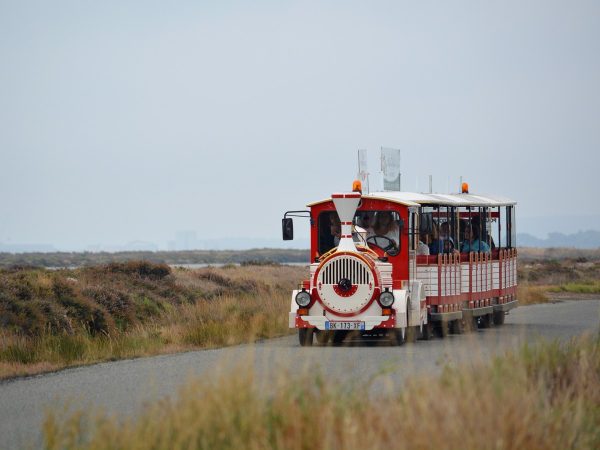 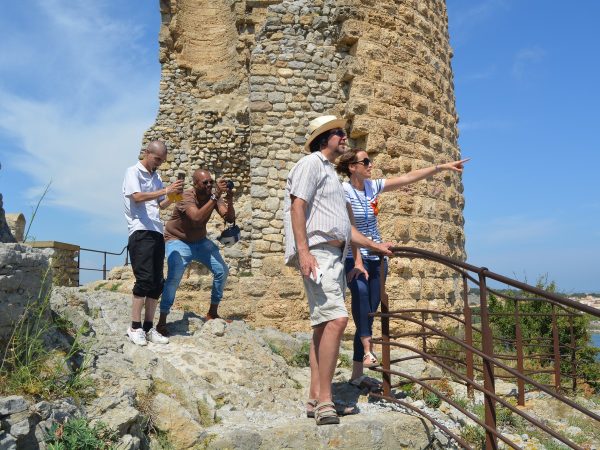